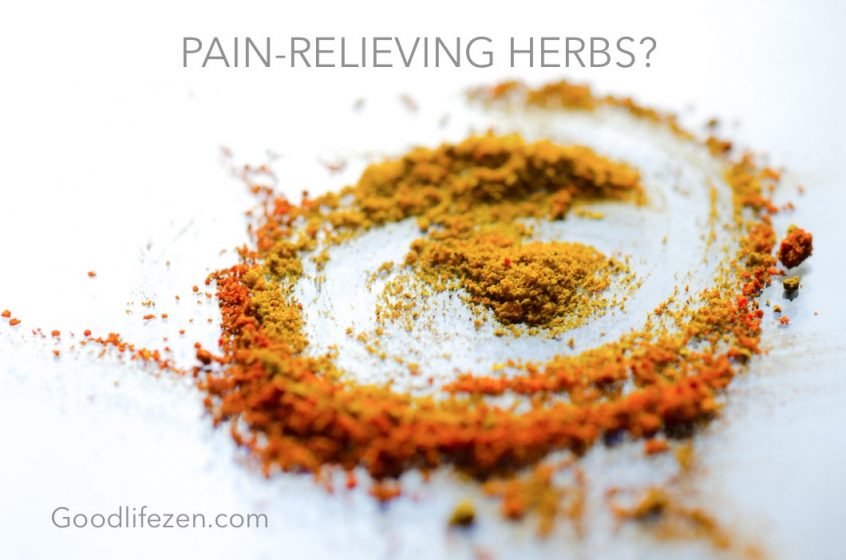 Do you suffer from pain? If so, this article is important because you’ll learn about pain-relieving herbs that can alleviate pain naturally.

Pain is the body’s natural response to something that’s not quite right with the body.

You may be injured, suffering from an illness or a temporary chemical imbalance. Whether it’s chronic or acute pain, it’s definitely something that you’d prefer not feeling. Modern medicine has popularized the use of synthetic pain-relief medication such as Vicodin or morphine. Not many people are comfortable with taking synthetic medication, and they have all the reasons to be afraid of constantly putting chemicals in their body.

This list is meant to help you choose a natural way of getting rid of pain:

Kratom, or Mitragyna Speciosa, is a tropical evergreen tree part of the coffee family that grows in Southeast Asia. It’s rapidly gaining popularity as an effective pain-relieving, sedating, mildly stimulating and mood-enhancing herb. Lower doses produce a mild stimulating effect which is comparable to caffeine, although with a more pronounced effect on focus and mood. Higher doses lead to pain relief, sedation and euphoria. Red Bali Kratom is widely regarded as the best Kratom for pain relief.

There are several Kratom strains that are being grown, and there are reasons to prefer one over the other. The differing alkaloid profiles of each Kratom strain are responsible for the varying effects, some strains producing more noticeable stimulating effects, while others generating increased sedation and pain relief. The pain-relieving properties of a high dose of Kratom can be compared to that of a common dose of hydrocodone (also known as Vicodin).

Turmeric is a rhizomatous herbaceous perennial flowering plant, long used in Ayurvedic medicine. It is primarily grown in India and other tropical parts of Asia, but it is also grown around the world in smaller quantities. Turmeric contains curcumin which is an effective antioxidant with anti-inflammatory properties.

It is used to relieve heartburn, pain caused by arthritis, tendonitis & autoimmune diseases, and also reduces inflammation. It is a safe spice when used in small quantities, but it is not good when used in large doses because it can cause indigestion. People who have gallbladder disease should not use this herb.

Turmeric is fat-soluble, meaning it is absorbed best infused in fat or oil.  Black pepper may also increase the absorption of turmeric. Try gently heating a cup of coconut oil and adding two heaped tablespoons of turmeric powder plus half a teaspoon of ground black pepper. Once it’s cooled, you can use this infused oil for cooking.

Cloves are unopened, dried flower buds of an evergreen tree (Syzygium aromaticum) that is part of the myrtle family. It is grown primarily in Indonesia, Sri Lanka, and Madagascar.

It has been used over the years as a remedy for mouth sores or toothaches because of their antibacterial and analgesic properties produced by the eugenol compound. It is similar to cinnamon in flavor, and it also has some anti-inflammatory properties.

One study that compared the difference in the numbing effects in both benzocaine and clove gel.

Both substances are effective in numbing the gums, although the clove gel had a much more pronounced numbing effect. Among the most potent herbs, cloves were ranked number 24 in terms of anti-inflammatory effectiveness.

This herb originates from southeast Asia, but it is now widely cultivated widely all over the world. It has anti-inflammatory properties, and it is also a potent pain reliever, being particularly effective when experiencing migraines. There was a study conducted on 100 people who had migraines, and ginger-powder had excellent pain relieving effects, similar to the drug sumatriptan.

Additionally, during a six-week trial where osteoarthritis patients participated, their pain medication was switched with ginger-extracts that were taken twice a day. The result of the trial was less pain felt while walking or standing.

This herb is grown in the Pacific Ocean islands, and it is made from the Piper Methysticum roots. Residents of Tonga and Fiji have been using this herb for centuries. Kava Kava contains kavapyrones which make you feel relaxed, happy, and calm.

It is also used to prevent seizures, as a muscle relaxant, and a pain-reliever. It has been used to treat stress, PMS, stress, and anxiety. You should avoid taking alcohol while using it and it should not be used for more than 3 months.

Wild Opium Lettuce is commonly found in the northern hemisphere where it flowers for 2months, from July to September. It is used to treat asthma, whooping cough, insomnia, urinary tract problems, painful menstrual cycles, restlessness, excitability in kids, joint or muscular pain, poor circulation, and swollen male genitals. Wild Opium Lettuce is widely used by people all over the world as an effective natural way to relax muscles, relieve pain and instill a calm state of mind.

Small doses are safe, while large doses are believed to cause breathing problems, ringing in the ears, sedation, and even death. It is not suitable for people who have a large prostrate as it can cause urinary problems.

Blue Lotus originates from the Nile river in Egypt. It has been used as a natural sedative for centuries. It is a sacred flower in Egypt as it has been used in religious ceremonies as a way to connect to the divine.

You can make tea from dried flowers, or you can smoke them to achieve an immediate relaxing effect. Blue Lotus works great as a stress reliever and sleeping aid. It has also been reported to treat gastrointestinal issues like dyspepsia and diarrhea.

Which of the Pain-Relieving Herbs is best?

Kratom is by far the most effective in relieving pain. Its potency makes it a contender for opiate withdrawal medication, and people all over the world have managed to quit heroin, morphine or other dangerous opiates by using Kratom. Combined with CBD, kratom has been shown to provide 43% more pain relief in patients in end of life care who also suffer from back pain and muscle spasms, according to the CFAH.org review of the best CBD oils for pain and combinations of drugs that work to treat pain better than standalone medications.

Of course, people react differently to herbs and supplements, which means that you may want to test a few and see which one works best for you. Also, ask your doctor before trying anything new, especially if you’re already on other medications.

Adrian Carol is the editor-in-chief at Nootrodelic, a blog about nootropics, psychedelics and how to use them effectively and responsibly to boost one’s quality of life and productivity.