Do You Dream of a New Start Like This Guy Did? - Goodlife Zen 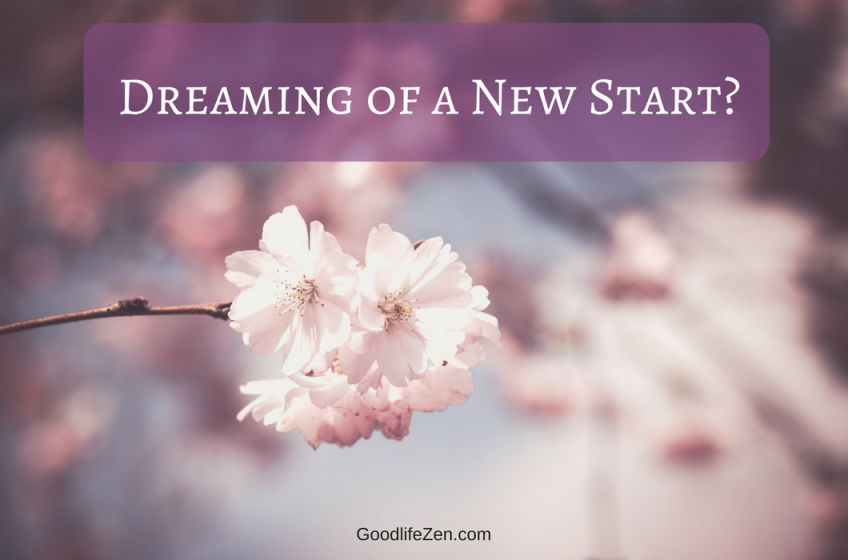 Do you sometimes fear it’s too late to realize your dreams?

I think all of us think like that at times. But read on to see how your dream of a new start can become a reality.

I’ve just had a light-bulb moment about time running out. And it was when I read about someone who has become an inspiration for me.

My new motto is now: It’s never too late to start a new life. In a moment, I’ll show you what life can look like if you follow this motto. But first, let me ask you something:

What do you think about aging?

Is it as the onset of decline or a time of development?

I looked up aging in the Encyclopedia Brittanica. Here is what I found:

Aging is the sequential or progressive change in an organism that leads to an increased risk of debility, disease, and death.

Debility, disease, and death. Not something to look forward to, right? This negative view of aging is pervasive in Western society. But aging doesn’t need to be like that. It can be a time of dazzling opportunities.

Here's the new paradigm of aging

Have you noticed? A new paradigm of aging is emerging. Aging has now taken on a new meaning. It can be a pathway of taking up new challenges and living each day to the fullest.

Let Me Introduce You to my Hero

At seventy, Charles Eugster took up rowing, a sport he had loved as a young man. He turned to exercise because he woke up to the fact that he had morphed into “a horribly self-satisfied, overweight, balding lump of lard.”

But then, at eighty-two, life delivered a blow: his wife died. In his book Age is Just a Number, Charles Eugster recounts:

“As a widower, whenever I looked into the future I could not see beyond a handful of bleak and final years. I had little to live for, it seemed.” But then he picked himself up and took steps to change his life.

He wrote of that time, “I may not have known it as I set out to reinvent myself, but my best years were ahead of me.”

I may not have known it as I set out to reinvent myself, but my best years were ahead of me The first thing Charles decided to do was to rebuild his body. His physical performance had deteriorated because his muscles had turned into flab.

So he went to a gym, chose a champion body-builder as a personal trainer, and told her: “I want a beach body!”

As you can imagine, she was taken aback, but after some thought, she agreed to work with Charles if he committed to the intense course of weight training she prescribed.

Slowly, his body lost fat and gained muscle and flexibility. His performance increased both physically and mentally.

He was back into rowing with a vengeance! However, at ninety-five, he was forced to give up rowing because of a heart murmur.

Would you think it’s now really time to take it easy? Charles didn’t.

At ninety-five, Charles Eugster decided to take up sprinting!

The decision came because his research into best exercise patterns for older people showed that bursts of strenuous exercise are better than long stretches of endurance.

Within two years, he became a champion sprinter for his age group. In an interview, Charles said, “I think old age as I’ve experienced it is one of the most fantastic periods of life. It’s absolutely marvelous, it’s stupendous, it’s terrific, amazing, exciting!” Charles never believed in retirement. He stopped working as a dentist at sixty-five but took up other opportunities. In his late eighties, he developed his public speaking abilities and began to give regular public talks (check out his TED talk below!). And in his nineties, he even was even contracted by a chain of gyms to promote exercise as an antidote to aging.

Finally, he wrote an inspiring book, called Age is Just a Number. It was published in January 2017. With this, he became the oldest first-time author at the age of 97!

Charles Eugster died in April 2017. His son, Andre said, “He passed away at the height of his success.”

To be at the 'height of success' at 97, isn't that phenomenal?

The good news is that every one of us can be like Charles. We can dream of a new start and make it happen. All we need to do is to ditch the ideas we may have about ourselves.  We are so much more than we imagine!

Remember, it's never too late to start a new life!

I think we can all benefit from being inspired by this story, right?