Double Your Productivity Now With These 4 Simple Steps - Goodlife Zen

Double Your Productivity Now With These 4 Simple Steps 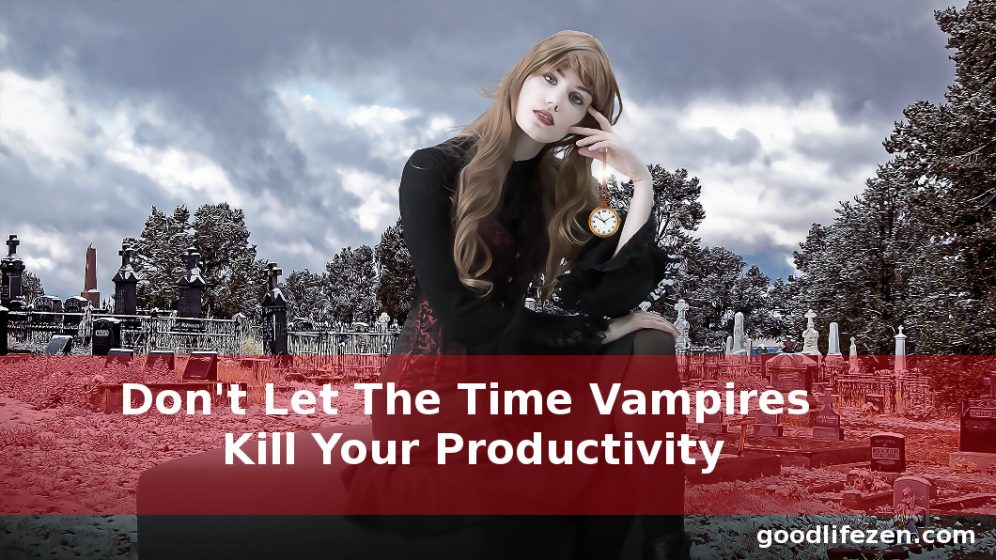 Is your productivity a victim of Time Vampires?

People who flutter around you day and night, waiting to sink their fangs into your precious 24 hours and suck it dry of any productive result?

People who leave your to-do list (work and non-work) bloated… and your time drained?

I used to be a victim of these Time Vampires at work and in my social life. I would start out full of good intentions to be as productive as possible that day.

But they would spot the light of my productivity and come swarming round with their unwanted requests, impositions and demands.

I tried to fend them off, but I was weak. Instead I unwittingly encouraged them by making myself the go-to person.

My lack of productivity left me stressed out. At work I was worried I’d fall even further behind with my workload and others would notice. And out of work, my time was never my own.

The antidote to these time-sucking vampires was obvious: To say NO!

But my attempts at saying ‘no’ proved ineffective, too weak, too guilt-ridden.

Until that is, I  finally understood one fundamental truth: I was not responsible for other people’s reactions when I said ‘no.’

It’s worth reading that again. And taking it to heart: You are NOT responsible for other people’s reactions when you say ‘no.’

How the other person takes your ‘no’ is their responsibility, and theirs alone.

It’s up to each of us to decide how we respond in any situation. We’re adults. It’s our job to behave in a manner we feel is appropriate. Which is exactly why you’re not responsible for anyone’s reaction, nor for trying to control that reaction.

That isn’t saying for one moment that you shouldn’t consider their feelings in the words you choose.  You’re naturally kind and compassionate.

But in the same breath, it’s your time, your productivity and your stress levels!

So follow the 4 steps below and I guarantee you’ll double your productivity (and halve your stress), just as I have.

(The following technique is taken from my book : The Life-Changing Power of NO! – How To Stop Trying To Please Everyone, Stand Up For Yourself And Say No Without Guilt Or Conflict (Even To Difficult People))

The number one rule in saying ‘no’ without causing offense is to be as honest as you can. You don’t like being lied to and neither do other people.
Besides, you suck at lying. You suck bad. Most good, honest people do. Lying simply doesn’t come naturally. And they’ll know, because how many times have you been lied to and cringed at how obvious it was?

TIP: That’s not to say that a slight fudging of the facts to spare the other person’s feelings is wrong. Being kind is always the best policy. Honesty needs to take slight second place if telling the whole truth will ruin someone’s day.
But there are ways to be as honest as possible.

For example, starting in with the whole truth like “I’ve had a problem saying ‘no’ in the past and now I’m cautious about taking on new things. I need to make sure I don’t get overwhelmed again”. You don’t then need to expand on how busy or not you are.

Find something you can say honestly. It’s absolutely fine to leave the rest unsaid. Anyone who doesn’t respect that, doesn’t deserve your time anyway.

Question – what’s going to happen if you don’t start saying ‘no’? How are you going to carry on months, even years down the line? There are only 24 hours in the day and you’re already burning through 18-20 of those doing stuff you feel you have little or no choice over.

And then you try to sleep for the remaining 4-6 hours and sweat that you’re going to let people down.
And you will. No one can keep juggling that number of plates spinning in the air for ever. And when one comes crashing down, the rest soon follow.

It’s better to say ‘no’ on your terms, while you still can. And before the consequences get too messy. Most times, not managing to do what you promised later down the line has far more significant consequences than early on.

It’s an odd phrase though isn’t it…  ‘Letting someone down’. Trying to help out and finding you can’t manage it, isn’t actually letting anyone down – not them and definitely not yourself. You tried and it proved too much. Period.

Saying ‘no’ at the beginning, or early on, isn’t letting them down either. You see, looking ahead before you say ‘yes’ to accepting that task or responsibility is an important part of giving a considerate response.

Don’t worry if you have been saying ‘yes’ forever. The long term gain for you, and the other person, is always worth a little short term pain.

And it’s usually way less than you think it will be for either of you.

You know, folk aren’t offended by being treated with respect. Funnily enough that makes us all feel great, it’s a basic human trait.

By being as straightforward as possible when saying ‘no’, you’re saying “I respect you too much to roll out a load of bull and expect you to swallow it”.

Now I know that there seems to be a very fine line between saying what you mean and saying it kindly: For example:

“No, I don’t like coming round for tea, your cakes make me feel poorly and your dog licks the icing when you’re not looking – yucky!”

That does sound a little harsh, don’t you think? So I’m all for a little bit of dressing up, similar to fudging the truth a little.

Remember that isn’t advocating a rash of dishonest statements up and down your day, uh-Huh! It’s simply leaving out facts that don’t need to be said.

And in being straightforward, the same applies.

“Tea and cake, that’s a great offer. I’ll just go for the tea from now on though thanks. I’ve decided to stop the cake altogether”.

No need to mention you don’t feel dog’s saliva is a bonus frosting, at all 🙂

Being straightforward will save you a lot of having to explain. Or feeling the need to elaborate on your reason for declining their request. And it will significantly reduce the chance of them not hearing your ‘no’.

That way you don’t leave them feeling foolish for not having understood your response, or angry that they were fed a line. By cutting to the chase kindly, you’re acting the way you feel is appropriate – showing them and yourself respect.

4. Keep it short and sweet.

There’s a very compelling reason to keep your ‘no’ short and sweet: You’ll end up taking your ‘no’ back!

You can fall into the trap of over explaining all too easily. And doing so gives the other person ample ammunition to attack and force you to surrender your ‘no’.

Whether they do that consciously or not isn’t the point. What matters is that their emotional attachment to the outcome is so strong, they are capable of seeking out any ‘weakness’ in your argument.

It’s harsh, but we can all innocently make it much harder for ourselves to say ‘no’.

There you have it. A simple 4 step technique to help you keep those Time Vampires at bay.

There is, however, an extra step. It’s not essential, but it helps make the world the wonderful place it is..

Be kind whenever possible. It is always possible. Dalai Lama

Even for the most demanding of people, every now and then their requests deserve your time and energy. It’s a case by case scenario.

Maybe there’s someone in your life who asks every time rather than trying to do it themselves first. Maybe they’re perfectly capable enough, but it’s easier to call you up and get you on the job instead.

Or perhaps you know someone who doesn’t like to be challenged or out of their depth and they figure you can always suck it up and wade in on their behalf.

And sometimes there’s someone who calls on you because they’re asking for your help. But not help with whatever task they are superficially asking you to aid them with. That is just a smokescreen.

Behind it is a hidden plea. Often they are lonely, or lack self-confidence. Or they may actually need your help in other ways they’re afraid to admit. So they make up some lesser request to hide their greater need for your help.

Hey, we’re all complicated human beings struggling with our own challenges and you may have gotten a little worn down with all these requests. And absolutely, you still need to stand up for yourself

But when the need arises, you can do it with extra compassion as well.

BUT! And this is an enormous elephant-sized but… you still need to make helping out work for you too. So feel free to meet just enough of their request to help out but not absolve them altogether – remember it’s their situation, you’re the good gal or guy in this.

So be fair and consider each request on its own merits. And if you do then decide it’s a ‘no’, that’s absolutely fine too.

Learn to say ‘no’ effectively and double your productivity

It’s time to lower your stress levels and raise your productivity levels instead.

And you can do it without feeling guilty or offending anyone.

So next time a Time Vampire comes looking to suck your productive day dry, just say ‘no!’

Don’t lead them on

Just be straightforward, but be kind.

And lastly, remember to keep it short and sweet.

Apart from anything else, you’ve got your day to get back to.

And it’s going to be gloriously productive.

How To Make Your Waiting Time Productive

How To Overcome Procrastination So You Can Enjoy Your Life

By Rudolf Zimmerer
About the author