When Did You Last Look Up? An Early Christmas Tale - Goodlife Zen 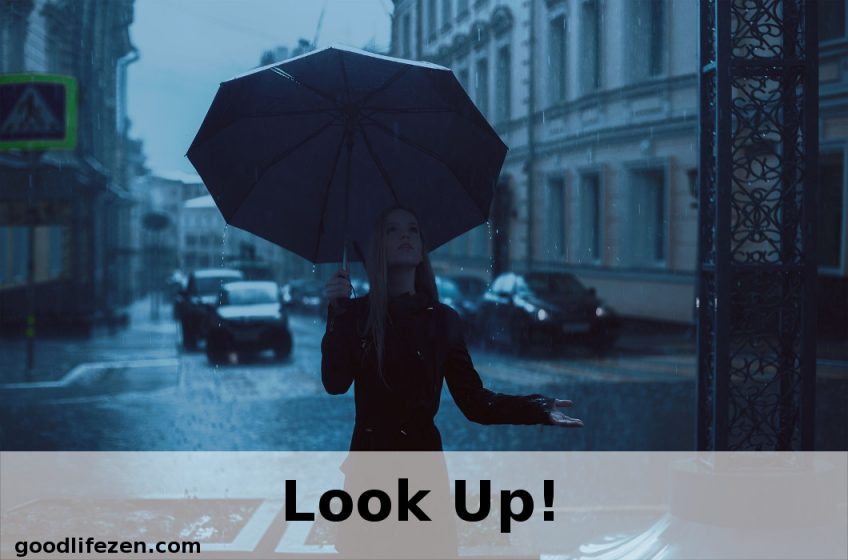 I was snailing into town, silently seething, he was tearing out of town, siren screaming.

The sound of the ambulance’s klaxon echoed off the tall Victorian Houses, amplifying the urgency. It sounded like the whole street was answering an emergency.

And I didn’t want to be there.

It had been one of those really long weeks. The kind that makes home and pajamas attractive mid-afternoon on a Saturday.

But there were things that had to be done. Dull but essential stuff.

So there I was, crawling into town in the stop-start traffic, feeling like a lemming herding into the crazy busyness of Saturday at the shops. Yuk!

My plan was to be speedy and effective. Execute the items on my list and hot tail it home away from the soulless chaos of the city.

Because thousands of others had dull stuff to get done too.

And they’d had a long week as well by the look on the line of tired, down-turned faces queuing for the car park machine. The one machine, because the others were out of action. Oh, great!

And then it hit me.

This was going to be hideous. A heaving mass of harried shoppers and even more harassed shop assistants – oh, joy!

And the multi-store car park bore this out:  jammed full.

Someone waved me into a parking space that opened up. I half-waved, “Thanks”.

Down on street level, it was pandemonium. Thousands of coats pulled tight against the drizzle, heads down. Thousands of shopping bags ready to be filled.

Someone handed me a scrap of paper. Ah, I’d dropped my shopping list. “Thanks”.

And then I saw the queues!  And I thought I’d got in early – ish. Grumbling all the way, I inched my way along those stupid rope guides that eventually deposit you at the till.

The girl smiled. My stuff neatly packed in several bags later, she wished me a great afternoon. “yeah, thanks”.

But that damn ambulance driver was still plaguing me. That had been so odd.

My mind was dragged back to the present. The weather, bored with merely drizzling, turned the dial up to sleety rain, just for the fun of it. No umbrella in my bag – aggh.

We all had our heads down now.

And we all had the same idea – hit the indoor mall.

Under the blow heaters at the front of the store, someone pushed past me to grab a basket. Grrr! Taking two, he held one out to me. “Thanks”.

Behind her and me, the queue snaked further and further.

And then the fire alarm went.

No way! Not now. Not after queuing for what seemed like half the morning.  And so close. I could have reached past the old girl and rung my purchases up myself.

Was the alarm for real? Nobody knew. “Everybody out.”

Someone took the old lady by the arm. Everyone else filed out, calmly and quietly. A security guard opened another door to the outside and gestured urgently – it was a quicker route out. “Thanks”.

Outside we all stood in the rain like lost sheep. My quick ‘in and out’ shopping trip a wash out, the sour cherry on top of the crap week I’d had.

Someone shared their umbrella with me.

Behind me the alarm kept screaming.

“Thanks, that’s really kind of you.”

I was snailing in. He was screaming out.

And I’d missed the point entirely.

You see, I live in a quiet green pocket of rural-ish-ness. If I turn right out of my door there’s a small village 3 miles away. If I turn left, a massive town 4 miles away.

I hate turning left. But once in a while I need that town for its shops.

Not however, for its crowds. Not for its population hell bent on starting the Christmas rush early. Not for people caught up in getting through their own day. In getting their own essentials done, in looking out for themselves.

And looking out for each other, I now realized.

I just needed to look up.

If I could have stopped that ambulance, I would have.

I wanted to thank the driver, to shake his hand. Actually to give him an embarrassed ‘we’ve never met’ hug. Because he gave me one of those epiphany moments you see in films but that never actually happen in real life.

Except last Saturday, when I had that moment.

He was saving a life. I was grumbling to myself about the traffic.

The road had been blocked on his side by a truck. I’d stuck my hazard lights on and pulled onto the kerb. He’d swerved round the truck, lights blazing.

And then he’d held his hand up and mouthed “thank you” above the wail of the siren.

He was saving a life. But he’d taken the time to thank me.

In the town, I was grumbling to myself about the parking, the crowds, the queues, the rain.

They were even taking the time out of their precious weekend to share umbrellas with grouchy strangers.

A Community is made up of neighborhoods, folks living together. Sharing the same space, getting by, getting along, getting things done.

And that’s a wonderful place to live.

And next weekend I intend to return and finish my shopping among the chaos of parking,crowds, queues and old ladies struggling to keep up with modern life.

And I intend to take the time to be thankful for them all.

Townsfolk to the left of me, I you an apology.