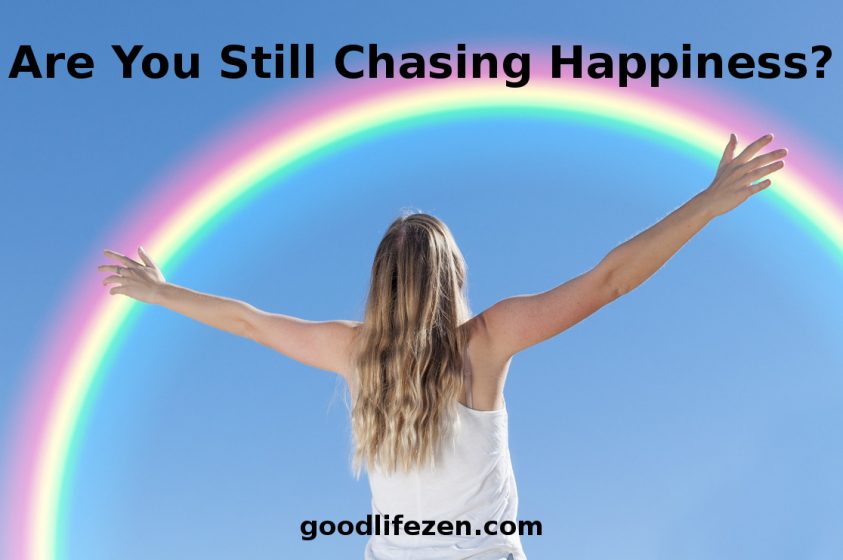 Really? When what happens?

When you get that new job? You win the powerball? All your problems miraculously disappear?

The reality is... tomorrow never comes. Old news for sure, yet wisftul thinking about ‘tomorrow’ still overpowers your happiness today.

All the good stuff never happens tomorrow. It happens today.

And if you spend your life wishing your todays away,  you’ll be chasing happiness forever.

This isn’t the first time you’ve thought I’ll be happier tomorrow, is it?

And it won’t be the last.

Because ‘tomorrow thinking’ is a vicious cycle. A cycle of endless waiting. Waiting for something tantalizing that never quite arrives.

Like scratching the silver foil off a lottery card. You have that tantalizing hope that it will reveal that jackpot… “me please, please, please!”

But how often does it?  And even if it does, how soon until you have slipped back into ‘tomorrow’ thinking?

You see people have a  tendency to remain at a relatively stable level of happiness despite a change in fortune or the achievement of major goals. Even if you make more money for instance, expectations and desires rise in tandem, which results in no permanent gain in happiness.

There is, as ever, more to it than that, but basically we humans and our happiness soon get used to change. And once we do, we slip back into the same level of happiness we were at before.

And it’s the same with tomorrow thinking, it’s a treadmill, a hamster wheel. No matter how hard you try, you never get any further down the road to happiness. (And unfortunately it doesn’t even make you fitter or slimmer).

The problem is three-fold:

2. We glamorize tomorrow.
When we want something we tend to fixate on the positives which is, well, positive. However, once we get it, we tend to concentrate on the negatives.

When you’re dreaming of that retirement home by the sea, you picture the peaceful ocean, the bracing air, the bustling summer community.

When you actually retire there, you fixate on the freezing winters, the constant gale force winds and the closed, wintry, deserted streets.

3. We think we control tomorrow.
Whatever you are dreaming of may not happen. A lot of stuff in life is simply outside of your control. You may ace that job interview but the company might fold before you can take up the job (it’s happened).

You may dream of seeing herds of reindeer at the North Cape, but they may disappear before you get there – that also happened to me.

And  yeah, some bright guy did once say there is nothing good or bad in this world except thinking makes it so.

However, unless you’re William Shakespeare or Buddha himself, that might just be too much of a stretch.

The Day After Tomorrow Thinking

So are we condemned to forever chase rainbows?

Absolutely not. There is an alternative. And it’s probably not what you think.

You’ve heard that the answer is ‘to live in the present’. This is great advice, but it’s a catch 22 situation.

Well, it asks you to change the very thing that’s creating your problem without giving you a means of doing it. If you could only think of the present day and live in the moment, you wouldn’t be dreaming of happiness tomorrow in the first place, would you?

What you need is a solution that takes the already common human behavior of looking into the future… and magnifies it.

So rather than think of the present… think even further ahead than tomorrow.

Adopt ‘the day after thinking’.

What’s the ‘day after thinking’? Let’s take some examples:

1. The crock of gold at the end of the rainbow: A job promotion.

Tomorrow thinking says, ‘once I get that job promotion, I’ll be happier’

Why? Because it will mean more prestige, more money, more happiness.

Why? Because if you look beyond the initial glow of that first up-rated paycheck , what you may have swapped it for is years of more responsibility, more hours, more stress. And more debt.

Ok, you might agree with the responsibility and hours, but more debt?  Yeah, your pay rise could very well lead to more debt.

You see a lot of people are looking for that pay rise because they are in debt. And they think the extra salary will clear that debt. But they are in that situation because they don’t have enough money management skills and getting more money simply exacerbates the problem.

And even if it doesn’t, is the extra monetary gain worth the extra long term gain in stress?

2: The unicorn at the end of the magical road: You win the powerball.

The ‘day after tomorrow’ thinking says ‘Now I’ve got a bunch of new problems and I’m not even sure I’ve sorted out my old ones.’

And also rich people are better equipped to handle their problems because they grew or were born into them. If you’ve become ‘rich’ by winning money then you have no real idea how to handle the stresses of spending or keeping that money.

The result is you end up either blowing the lot and then you’re no longer ‘rich’. Or hoarding it because you’re too scared it will all disappear as you have no idea how to replace it.

So you live as if you never won the money anyway.

And either way, your happiness ends up back where it started.

3. You jump on that unicorn, fly to the end of the rainbow and find your crock of gold: All your problems are gone.

‘Tomorrow thinking’ says, ‘If all my problems disappeared tomorrow, I ‘d be happy’.

Why? Because the ‘day after tomorrow’ thinking rightly looks ahead and recognizes that if you have no problems next month, next year or from now onwards…. you must be dead.

Because the only place you’ll find a bunch of people, rich or not, with no problems… is the graveyard.

So once you’ve discarded ‘tomorrow’ thinking for the ‘day after’ thinking, does it mean it’s pointless to go after anything in the future from a pay rise to a holiday?

The answer is found in the stoic French phrase:

Which roughly translates as as: ‘the more things change, the more they stay the same’

And as the originator never seem to get any credit, it was the French writer Jean-Baptiste Alphonse Karr. He also apparently gave his name to a variety of Dahlia – irrelevant, but interesting.

Jean-Baptiste’s philosophy might sound a little pessimistic to you? If what you’re dreaming of won’t make you happy – what hope is there?

He was a bright spark, thankfully. He was simply pointing out that the good stuff is already here. Sure, tomorrow there might be some icing on what you’ve got today. Maybe some gravy or glitter. But essentially your happiness is right here, right now.

Just apply the day after tomorrow thinking and realize that whatever it is you are dreaming of, if you can’t be happy today without it, you probably won’t be happy tomorrow with it.

Because as Jean-Baptise would say, the more things seem to change tomorrow, the more tomorrow is in essence the same as today.

So your happiness in the future will in essence be the same as today.

The only answer is to concentrate on raising your present level of happiness.

And the way to make a quantum leap in your happiness level right now is to realize that it doesn’t have to depend on any spurious changes tomorrow.

Concentrate on being happier everyday with what you already have today, not what you dream of getting tomorrow.

Then you can chase all the rainbows and unicorns and pots of gold you want.

Just for the heck of it.